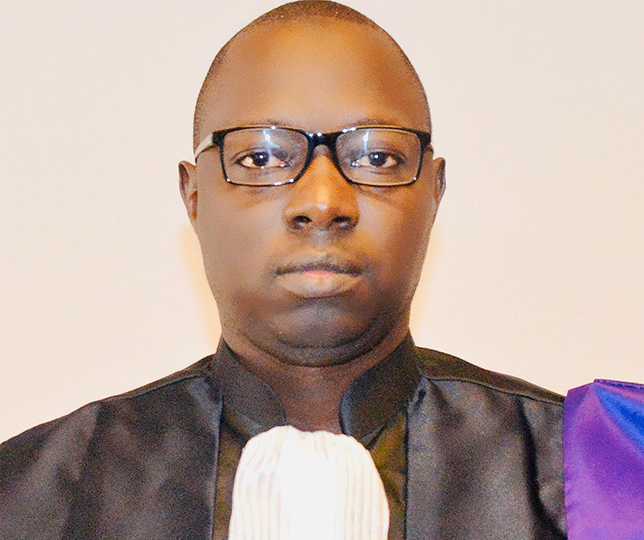 Professor Ousmane THIARE has spent most of his academic and professional career at Gaston Berger University of Saint-Louis (UGB), an institution of excellence created in January 1990 and Senegal's second public university.

Ousmane THIARE joined the UGB in October 1994 and obtained a Diploma of Advanced Studies (DEA) in Applied Mathematics in 2000, after a clear course of study.

In parallel to this brilliant career, the THIARE teacher was already teaching courses at the same university that so well trained him, the UGB. He was first a fulltime IT Assistant in 2002, a fulltime Assistant Professor in 2008 and then an HDR Senior Lecturer in IT between 2010 and 2015. He continues this teaching experience in Nigeria at the African University of Science and Technology (AUST) in Abuja where he has been an Associate Professor since April 2014.

In addition to this academic experience, Ousmane THIARE was Head of the Computer science department at the Faculty of Applied Sciences and Technology (UFR SAT) between 2007 and 2009, Coordinator of the Post-Graduate in Computer Science in 2011 and then in 2013, Director of the Ousmane Seck IT Computing Centre. The IT Computing centre has a teaching, research and training mission. It is also responsible for the implementation of the University's computerization program.

Appointed Expert Evaluator of the National Authority for Quality Assurance in Higher Education (ANAQ-Sup) since 2014, he is also a member of the Scientific and Pedagogical Council of the Doctoral School of Science and Technology of the UGB of Saint-Louis.

Professor THIARE has also been the Director of the African Centre of Excellence for Mathematics, Informatics and Information and Communication Technologies (ACE-MITIC) between 2017 and 2020. ACE-MITIC is an ambitious World Bank project with a budget of US$8 million to change the dynamics of access to employment by training a quality workforce while connecting all actors, applicants and other service providers in the fields of Mathematics, Computer Science and Information and Communication Technologies (ICT). Areas in which Gaston Berger University and its Professor have proven expertise.

It is with this rich but comprehensive experience that Professor Ousmane THIARE was appointed, in May 2018, Rector of the Gaston Berger University of Saint Louis, President of the Academic Council of the University. As Vice-chancellor (Rector), President of the Academic Council, he is in charge of the study programs at Gaston Berger University. It shall exercise the management function of the University and shall be responsible for the formulation and implementation of appropriate policies and operational decisions relating to the higher education institution, and in accor- dance with the University’s strategic plan. He is responsible for the implementation of inno- vative programs and the adoption of new advanced technologies by the University in order to make it competitive on a global scale. It is responsible for establishing and maintaining mutu- ally beneficial relationships with educational and research institutions, government institutions, commercial enterprises, industrial, professional, social, civil society and cultural institutions at the regional and international levels. He is also the chief authorizing officer of the university’s budget.

In December 2021, Professor Ousmane THIARE was elected Full Member of the National Academy of Sciences and Techniques of Senegal (ANSTS) in the Fundamental, Applied and Innovation Sciences Section (FAISS).

From November 2019 to June 2022, Professor Ousmane THIARE led the team that worked on the Scholars Program of the Mastercard Foundation. This program resulted in a funding, over nine (09) years of an amount of USD 37,786,408 or 23.7 billion FCFA. The Scholars Program at the Université Gaston Berger (UGB) aims to train 1,000 Scholars, 70% of whom will be women, at the undergraduate level in the fields of digital, agriculture, health and engineering by 2030 and to facilitate their transition to dignified and fulfilling work so that they can serve their communities and contribute to Africa’s development. At the end of the proposed program, Scholars will become committed leaders in their communities and participate in developing their countries and Africa.

In June 2022, Professor Ousmane THIARE was appointed Director General of the National Cyber-Infrastructure for Higher Education, Research and Innovation (CINERI).

His various works are published in numerous international journals and conferences that can be discovered by browsing this site.